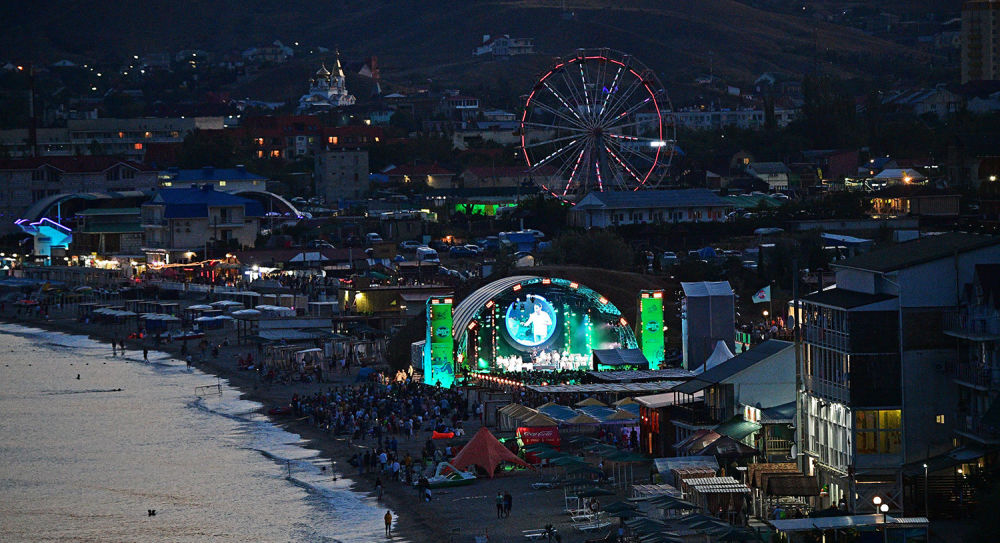 Last Sunday, August 23, the 18th jazz season in Koktebel on the Black Sea coast ended with a performance of SG Big Band led by Sergei Golovnya, a virtuoso saxophonist, composer, arranger and one of the art directors of the Koktebel Jazz Party.

For three days, from August 21 to 23, the bohemian village that gave its name to the festival became an open-air concert hall. About 7,000 spectators watched performances on the Main and Voloshin stages. To create a unique atmosphere of an open-air jazz festival, the KJP 2020 organizers brought and installed 20 tons of sound and light equipment with a capacity of thousands of kilowatts.

Addressing the musicians and spectators at the closing of the Koktebel Jazz Party, its founder, chairman of the festival organizing committee and Director General of the Rossiya Segodnya International Information Agency Dmitry Kiselev thanked everyone “…who, despite the circumstances, showed loyalty to Koktebel Jazz Party.” “We did it. I'm so happy about that,” he said.

To ensure safety of both the participants of the festival and its spectators, the organizing committee complied with all the coronavirus-related sanitary requirements of Rospotrebnadzor, the Russian consumer watchdog. Commenting on this, Kiselev emphasized: “...We placed chairs and asked people to occupy every other seat. Masks, sanitizers, restrictions. But nevertheless, it was a great celebration, which we all waited for. This is the eighteenth festival, and we just couldn’t miss this coming of age event.”

On the evening of August 21, the festival was opened by the Big Jazz Orchestra led by Peter Vostokov, the Brazilian jazz band Esh, Manka Groove and Yakov Okun’s star ensemble featuring Larisa Dolina and Hibla Gerzmava. Despite the coronavirus restrictions, the festival reaffirmed its international status: on the first day, the Dave Yaden Band performed live from Los Angeles via video linkup as part of the traditional Jazz at the Speed of Light program.

Saturday evening saw performances by the Wild Brass band, People’s Artist of Russia Igor Sklyar and the Jazz Classic Community, Anastasia Lyutova and The Band and the Moralny Kodex and its frontman Sergei Mazayev.

On the final day of the festival, the first to perform were Daniel Kramer Trio, Chetmen and Igor Bril’s group Bril Family with the participation of vocalist Mariam Merabova. One composition, together with art director of the festival Sergei Golovnya’s SG Big Band, which completed the festival, was performed on the piano by 10-year-old Varya Kiseleva.

The special partner of the Koktebel Jazz Party, the Alrosa jewelry group, held a prize draw for the spectators during the festival. Also, the sound meter measured how loud the audiences applauded during concerts on the Main Stage on all three days of the festival, and at the end of the concerts, the winners were presented with an award by Alrosa.

The dates of the Koktebel Jazz Party 2021 festival have already been set: it will be held on August 20 to 22.

In April 2020, the Koktebel Jazz Party, the Rossiya Segodnya International Information Agency and the Red Square Group organized the Doctor Jazz Party online marathon in support of Russian doctors and hospitals during the fight against the coronavirus pandemic. The marathon got underway on International Jazz Day, April 30, on the leading Runet website, ria.ru, and on RIA Novosti’s official VKontakte account. The Doctor Jazz Party online marathon brought together jazz music stars from nine countries, including Russia, China, the United States, Brazil and Japan. The marathon lasted seven hours, with about two million people watching its performers.

The Koktebel Jazz Party was conceived in 2003 as a private initiative of journalist Dmitry Kiselev, the founding father of Koktebel jazz. The festival got its name from the small Crimean town and now occupies a befitting place among jazz festivals worldwide. As usual, the organizers do not disclose the names of its famous participants. Over the years, legendary US drummer Jimmy Cobb, Cuba’s Gonzalo Rubalcaba, recipient of the Grammy Award for the best Latin jazz album, US bass guitarist and bassist Stanley Clarke, known for his innovative technique, New Jazz stars Club Des Belugas from Germany, unique saxophonist Robert Anchipolovsky from Israel and Germany’s De-Phazz ensemble from Heidelberg have all performed at the festival. President of the Russian Federation Vladimir Putin attended the 2017 Koktebel Jazz Party.

The Koktebel Jazz Party is not just world-class jazz, but true freedom that creates a united vibration of music, the sea, body and soul. The Rossiya Segodnya International Information Agency holds the festival, and the Red Square Group is responsible for orgnizational matters. Since 2014, the Russian Ministry of Culture has provided support to the festival.