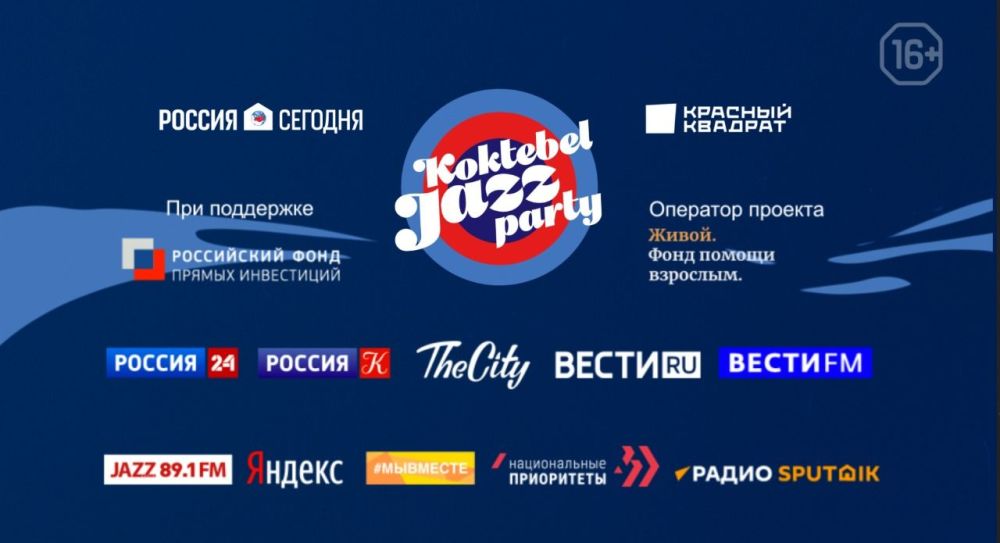 On International Jazz Day, proclaimed by UNESCO on April 30, the Koktebel Jazz Party musical festival will launch Doctor Jazz Party, an online charity marathon. It will support Russian hospitals and their staff, doctors and other medical personnel who are on the frontline of the fight against the pandemic.

With the support of:

The Rossiya 24 Russian information television network is the indisputable leader in providing reliable up-to-the-minute information on the most important events of the day, with live coverage bringing news to the audiences in real time.

According to the Medialogia information and analytical system, Rossiya 24 was the most frequently cited Russian TV network in 2019.

The Vesti.Ru information network is the main information source of the All-Russia State Television and Radio Broadcasting Company (VGTRK). The website publishes information provided by the television channels Rossiya 1 and Rossiya 24, and other important news.

Every day, website users access over 50 current video reports from around Russia and the world. News and videos by regional television and radio broadcasting companies are published in special sections. The website offers live broadcasts of the VGTRK TV channels and radio stations.

Radio JAZZ 89.1 FM offers all kinds of jazz, as well as rhythm and blues, soul and even funk.

We want to show that jazz is not necessary difficult music and certainly not always music from dusty LPs.

The стопкоронавирус.рф website was established by the Russian government to inform the public about the spread of the novel coronavirus. The National Priorities autonomous non-profit organization provides content and maintains the website. The organization was created in late 2019 to raise awareness about the goals and achievements of national projects, and to more broadly involve members of the public in their implementation.

The Sputnik radio station is the most cited radio station in Russia in 2020, as confirmed by Medialogia. The Sputnik website was launched in the early summer of 2019. It offers live broadcasts, as well as all previous programs (podcasts), plus news, analytical and opinion pieces on the key news in Russia and the world. The principal Russian media quote Sputnik every day.

The City: Everything on entertainment in Moscow

Opening ceremonies, premieres, good restaurants, original routes and, of course, the locals that make Moscow the way it is. The City project consists of a website and a daily program on the Moscow 24 television channel. It is a reliable guide to daily events in the megalopolis.

The City was born out of the wish to tell Muscovites how they can spend their free time and more. Every week we find our way through the endless sea of events to share the highlights.

The Rossiya-Kultura (Culture) television channel was established on November 1, 1997 and is part of the VGTRK media holding. The channel’s objectives are to provide educational content and present the treasures of the Russian and world culture to the audience. It offers unique films and programs, news, discussions and shows, covering all genres and arts: over 20 hours of broadcasts daily, 7,500 hours per year. The channel’s audience is 110 million people in Russia and CIS countries. The international channel in Russian, RTR-Planet, broadcasts the best programs of Rossiya-Kultura to many countries. The audience of the website tvkultura.ru and the channel’s social networks is over 2.5 million people.

#МЫВМЕСТЕ (we are together) is a nationwide initiative of mutual help that united commercial companies, public organizations, and active citizens against the spread of the coronavirus infection. The official website мывместе2020.рф is an aggregator where everyone can offer help, become a volunteer, and find out useful news. The initiative shows that Russia is full of organizations and people who do not sit idle during difficult times. Large companies set up hotlines, provide legal consultations and give access to free services for online work and education. Today the culture of good deeds in society is reflected in specific projects: this means common efforts and new opportunities despite the epidemic.